The London Schools Effect - what have we learned this week?

Perhaps the biggest question in education policy over the past few years is why the outcomes for London schools have been improving so much faster than in the rest of the country. I wrote about it here last year. Until now there's been little in the way of research into the question but last week two reports came out - one by the IFS and one from CFBT - that seek to provide some answers.

They both agree that the change in GCSE results has been spectacular. There's plenty of data in both reports on this but I found this graph from the IFS particularly powerful because it relates to a metric that isn't something schools are held accountable to - and so feels like authentic proof that something extraordinary has happened in London. 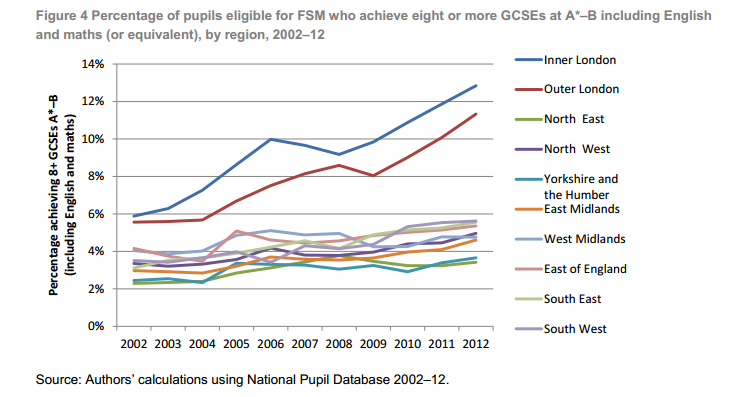 But what, exactly, has happened? Here the two reports seem to disagree. According to the IFS - whose analysis is purely quantitative the main reasons are:

The CFBT report does include quantitative analysis but is much more focus on qualitative research - specifically interviews with headteachers, academics, civil servants and other experts. This report argues the key reasons for London's improvement are:

At first glance it's hard to reconcile the positions taken in the two reports. The IFS focus on primary, and to a lesser extent pupil characteristics, while CFBT focus on secondary policy changes. I think, though, they are two different bits of an extremely complicated jigsaw that hasn't been finished yet - and because of the lack of evidence/data - never will be. Like the apocryphal blind men with the elephant they're looking at different parts of the whole.

1) Both reports probably underestimate the importance of changes in pupil characteristics. CFBT completely dismiss this as a driver based on an inadequate analysis of ethnicity data. The IFS analysis is more comprehensive and so does pick up a significant effect but may still miss the true extent because of the limitations of available data on ethnicity. I think this may explain the extent of the "primary effect" in the IFS report. Essentially they're saying the big improvements in GCSE results are partially illusory because they were already built into those pupils' primary attainment. However, they are unable (because of a lack of data) to analyse whether those primary results were also partly illusory because those pupils started primary at a higher level.

There is a clue that this may be a factor in their analysis of Key Stage 1 data for more recent years. Controlling for prior attainment at KS1 reduces the "London effect" at Key Stage 2 by about half. But the authors are unable to do this analysis for the crucial 1999-2003 period when results really improved. They are also unable to look from the beginning of primary - because we don't have baseline assessments when pupils start school.

3) The CFBT report definitely underestimates the primary effect because it doesn't look for it. Thought there are some quotes from people who worked in local authorities during the crucial period who highlight their focus on literacy and numeracy during the late 90s. 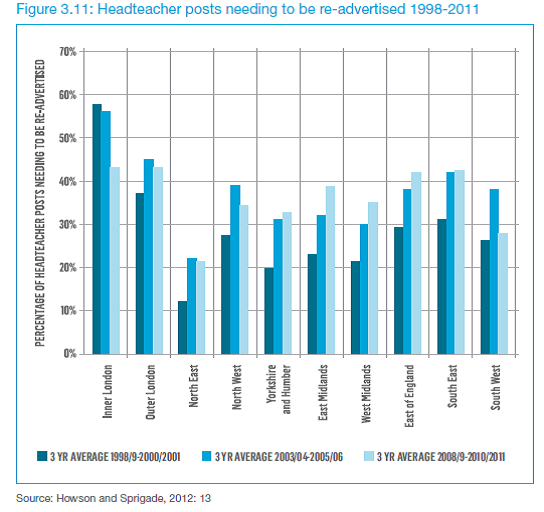 And of course the really big question - is any of this replicable in other areas? We're starting to see a raft of local improvement initiatives across the country - Wales Challenge; Somerset Challenge; North East Challenge and so on. It's really important that in these areas we do a better job of evaluating all the interventions put in place from the start so that if we see big improvements we have a better understand of the causes.

Loic Menzies - one of the CFBT authors - on the two reports

The London Challenge evaluation by Merryn Hutchings and others

Transforming Education For All: The Tower Hamlets Story by Chris Husbands et al