Why are London's schools doing so well?


London's secondary schools have been doing better than those in the rest of the country for some time now. They were already ahead in 2003. But the gap has widened over the past ten years to a chasm. Chris Cook - when he was the FT's education correspondent - was the first to analyse this trend in detail. And he realised that the official Government metrics of performance were actually hiding how far ahead London is.

Since then there's been a growing debate amongst policy wonks about why this is happening. But I think most people - even those in the education sector - still don't realise quite how far ahead London is now; especially for poorer children.

In this post I'll give some stats on how big the gap now is. I'll then question whether this is down to policy or socio-economic change. Finally I'll look at whether - if policy has driven some of this change - what that might mean for the rest of the country.

The size of the gap


The gap between London and the rest on the Government's main measure, 5A*-C including English and Maths, is negligible - 59% nationally and 62% in the capital. But that's actually quite surprising given how many more children on free school meals live in London compared to elsewhere (23% vs. 14% at secondary). When we look at just those children on free school meals we start to get a sense of the difference. In London FSM kids get 49% vs. 36% elsewhere. When you dig into LA level data the extremes are startling. Almost two thirds of FSM pupils achieved the 5A*-C benchmark in Westminster last year compared to less than a fifth in Peterborough (the lowest scoring authority).

But because 5A*-C is a simple threshold measure it obscures how much better London schools are doing for the very poorest. The graph below is taken from the recently published Milburn report on social mobility (in fact it's a variant of a graph Chris Cook did a while ago). It shows that children in London do better at GCSE and poorer children do a full grade better - across all their GCSEs - on average. The rich/poor gradient is much less steep meaning that, while London is one of the most economically unequal parts of the country, the education system is producing more equal results. 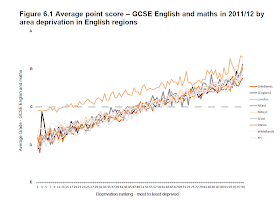 The next table is from some internal analysis we've done at Teach First. Here we've looked at only those schools that are eligible for Teach First i.e. those where at least half the pupils are in the bottom 30% of the IDACI (Income Deprivation Affecting Children Index).

Nearly all secondary schools in inner London meet this eligibility criteria. In other areas- like the South East just a small percentage do. We've compared the GCSE average points score in eligible schools in different regions (excluding all GCSE "equivalencies" and doubling the value of English and Maths). This shows eligible schools in inner London 100 points ahead of the worst performing regions (the South East and South West) which is equivalent to the difference between 6 D grades and 6 B grades. 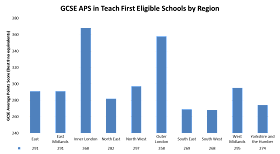 It's also important to note that this isn't just a GCSE phenomenon down to - perhaps - better gaming by schools in London. Our initial analysis of the DfE's post-16 destination data shows the pupils from Teach First eligible schools in London have about a 9 in 10 chance of going on to further education - around the national average for all schools - compared to about 8 out of 10 in other parts of the country. Poorer students from London are also much more likely to go to university.


Why is there a gap?

For me the big question is whether this gap has been driven predominantly by policy or by socio-economic changes. If the former then it's good news because. if we can work out which policies and how best to transfer them elsewhere, we can help schools in other parts of the country improve. If the latter then it's good for London but worrying for everywhere else as the gap will continue to grow.

There have been a number of policies over the past ten years that have disproportionately benefited London:

At the same time the socio-economics of London have changed massively. Essentially London has got a lot richer while much of the rest of the country hasn't. To illustrate here's some startling stats from a BBC article:

"A recent study estimated that the value of London's property had risen by 15% - or £140bn since the financial crisis began. That increase - just the increase - is more than the total value of all residential property in the north east of England. London's top ten boroughs alone are worth more, in real estate terms, than all the property of Wales, Scotland and Northern Ireland, added together."

And here's a scary infographic from the ONS: 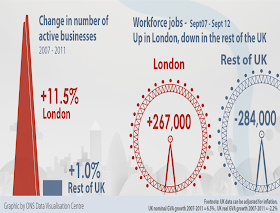 Not only has London got richer. It's got richer in precisely those areas where schools have improved the most. Look at this map discovered by Economist journalist Daniel Knowles. The red areas are those which have gentrified the most over the past ten years; the blue areas have gone "downmarket". 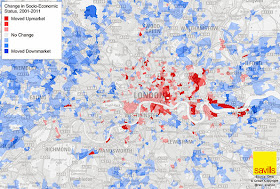 The areas that have seen the biggest change in socio-economic status - Westminster, Southwark, Newham, Tower Hamlets, Hackney - are also the areas which have seen the greatest gains in school performance.

This certainly isn't the whole story behind London's improvement but it's an interesting correlation. The secondary schools in these areas haven't suddenly filled with yuppies' kids, they're nearly all still eligible for Teach First, but many have become more mixed. Moreover, the children in those schools are exposed to very mixed communities, unlike some of the worst performing parts of the country where communities are much more uniform. And those areas have become a lot more attractive to teachers - especially young teachers.

So has policy or economics driven change? Given the lack of in-depth research on the topic all we can is it's a complex mix of factors. The extra money available in London probably helped but it wouldn't have been worth as much without the increased supply of bright young teachers heading towards the capital. Yes lots of charities like Teach First started in London but they did so because that's where recruitment is easiest.

London Challenge is perhaps the most interesting. Many headteachers who were involved will argue it was a hugely valuable experience - though there is little in the way of hard statistical evidence (e.g. comparing improvement in London Challenge schools with other schools in London that weren't part of the programme). But if it did work it was in large part because there was already a supply of excellent headteachers and advisers to provide mentoring and support.

What might it mean for the rest of the country?

The complex relationship between policy and non-policy factors in London mean we have to be very careful about drawing simple conclusions about what might work elsewhere.

It would be easy to say - and many have - let's roll out "challenges" in other regions. But they were tried in Manchester and the Black Country and weren't nearly as successful - perhaps because the necessary concentration of existing expertise wasn't there to make it work. And if it isn't there in Manchester it certainly won't be in coastal towns or dispersed rural areas where we have the greatest problems of underperformance.

Likewise there'll be little benefit to changing the funding system to switch funds from London to elsewhere if other schools can't get access to a ready supply of talented new teachers and the types of mentoring/tutoring initiatives that are so prevalent in London.

That doesn't mean regional placed based strategies aren't worth trying - I believe they are - but they need to be bespoke rather than just attempts to recreate London Challenge.

I get the impression that Nick Clegg's unfortunately named Champions' League of Headteachers is the beginning of an attempt to do this; but busing in new heads won't be enough. If regional strategies are going to be tried in the places that need them most there will have to be a concerted effort to create a sense of collective mission. Existing heads and teachers in the areas of focus will have to buy in; successful heads and teachers from other areas (and especially London) will have to recruited to provide support; charities will have to be encouraged to venture out of their urban hubs and, ideally, educational change will be linked to wider community projects and economic regeneration.

Change happened in London but it already had a lot going for it. Making it happen elsewhere will be a lot harder.