Why are young people today so sensible?

Earlier today the Home Office released some eye-catching stats on drug use. Since 1998 the number of 16-24yr olds self-reporting drug use has halved. 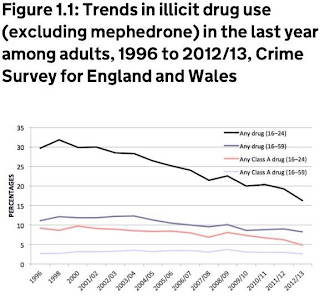 Interestingly all the articles I've seen on these stats have chosen to focus on the numbers using Nitrous Oxide - reported for the first time this year - with the overall fall in drug use buried down the story. This is not an accident. All newspapers (and even the BBC) systematically under report good news and will nearly always look for a negative angles.

This tendency means that the extraordinarily positive trends in social policy data are largely hidden from the public. Did you know, for instance, that:

Teenage pregnancies are at their lowest level since records began in 1969. (Look at how that stat is buried beneath a supposedly negative story).

That the number of crimes reported in the Crime Survey have halved since 1995.

And it's not just the media's fault. These trends don't really fit with narratives of either the political right ("broken society") or the left ("austerity Britain") so they don't get talked about. It's also not particularly in the interests of groups that campaign on these issues to play-up the positive trends. It's much easier to raise money for drug prevention schemes if people don't think the problem is diminishing.

It seems to me that understanding why this is happening is pretty important. For a start it does seem to be generational. The drug stats, for instance, show use amongst 25-39 year olds rising. It's also unlikely to do with any UK specific issues or policies as these trends are manifesting across the developed world.

One journalist who has tried to focus attention on this phenomena is The Economist's Daniel Knowles. In an article last year he suggested a number of causes:

"Whatever has happened to carefree youth? Public-health campaigns, better education and more hands-on parenting have no doubt had some effect. Some young people are probably staying inside watching television and playing video games instead of smoking behind the bike sheds. And Britain’s population is changing. The proportion of 15- to 24-year-olds who identify themselves as “white British” has fallen slightly in the past decade, to about 80%. Among the groups filling the gap are British Pakistanis and Bangladeshis, who are less likely to drink or take drugs than their white peers."

I'd add a couple more suggestions to the list including the increasingly negative portrayals of drug, cigarette and alcohol use in TV and films. Another suggestion that arose in twitter discussion today is that these are the children of a generation that were the highest users of dangerous substances; and there's nothing less cool than being like your parents...

Of these the change in social behaviours seems particularly important to me. Young people are just spending much less time in the physical world and much more time in the virtual. Even since 2007 there's been, according to Ofcom, a 25% increase in the average amount of time 12-15 year olds are spending online (to 17 hours a week). And girls in that age category send a frankly mind-boggling 221 texts a week on average.

Whatever the reasons the trend poses some interesting questions about how these shifts might affect the next generation of children. We know that young people whose parents are teen Mums, drug or alcohol addicts or in are in prison are much less likely to do well in school. If there are fewer such parents in the future it should have a significant knock on impact on education (as well as other public services like health and prisons).

It also means that jeremiads about "young people today" can be safely ignored. A narrative of decline around young people has been commonplace throughout history (though that famous Plato quote about children disrespecting their elders is sadly not genuine). But now more than ever we can safely say that young people are much more sensible than their elders were at their age.